Formation of the American Turners-Northwest Chicago 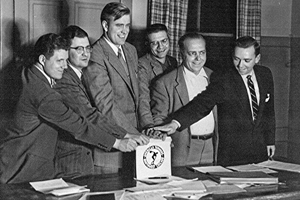 Because of declining society memberships and deteriorating Turner Hall neighborhoods, several attempts were made to merge the Turner societies located on the north and west sides of Chicago. In March, 1945 the Forward Turners sold their Turner Hall at 2431 W. Roosevelt Road and rented gymnasium and hall facilities at the Olympic Building located at 6100 West Cermak Road in Cicero, Illinois. The Swiss Turners were later forced to abandon their gym program at the Swiss Clubhouse, 635 West Webster Street, because of the huge rent they were asked to pay for only a few classes. These developments, among others, led to the Illinois District of the American Turners forming an 'amalgamation committee' in November, 1948. The first meeting was held at the Lincoln Turner Hall and was attended by delegates of the five north side Turner societies, namely; Chicago, Forward, Lincoln, Social and Swiss. Ted Gross of the Forward Turners was elected chairman of the committee.

This committee held many meetings trying to agree on some sort of a merger but were faced with much opposition from each society regarding society name, location, identity of old societies, contributions from each society, leadership, etc. An amalgamation plan was finally presented to each society but was voted down by each group. The committee was later reformed, again with Ted Gross as chairman, to develop another plan of amalgamation. This new plan was presented for society vote in 1953 and was again defeated.

During the period from 1945 to 1952, the Forward Turner Society was investigating many existing buildings such as factories, theaters, catering halls, etc., to try to find a building suitable for conversion to a Turner Hall. Nothing was found to satisfy the majority of their membership. In October, 1952 a building committee was formed by the Forward Turners with William Meyer elected chairman. In 1953 this committee entered into a purchase agreement with Gerte Poss to purchase the Luxembourg Gardens and Hall on Lincoln Avenue in Morton Grove subject to approval by 2/3 of the membership of the Forward Turners. This property consisted of a building containing a restaurant, bar, apartment and rental hall and a picnic grove of several acres. The proposed purchase was put to a vote of the society in 1953 and failed by 2 votes to meet the 2/3 requirement.

The committee members continued their search for property with repeated negative votes by the society mainly because the society could not agree on a location suitable to the majority of the members. In May, 1954, Dolores Meyer located an available piece of property on West Belmont Avenue, and her husband, William, chairman of the building committee, placed an earnest money deposit with the agent and presented it to the society for a vote. The purchase was approved and on June 29, 1954, the Forward Turner Society bought the parcel on the S.W. corner of Belmont and Natoma Avenues (133' x 125') for $5,000.00 from Raldon Williams, subject to back taxes. These back taxes and legal fees were settled for $8,613.98, making the total cost of the lot $13,613.98. This lot was eventually used as the parking lot for the new Northwest Turner Hall constructed on the S.E. corner of Belmont and Natoma.

The Forward Building Committee immediately contacted an architect, A. Kefer Associates, who prepared a floor plan and elevation sketch of a Turner Hall to be erected on the new lot in accordance with the directions of the building committee. Preliminary finance and publicity programs were agreed upon.

In January, 1955, the Forward Turners sent invitations to each of the other four societies to send five delegates to meet with their five delegates to discuss the proposed consolidation. The Lincoln Turners regretfully declined because of the serious financial burden of their own building. The other three societies all responded favorably but the Chicago Turners later dropped out. The meeting of the remaining fifteen Turners representing Forward, Social and Swiss was held on February 10, 1955 and elected William Meyer, Forward, chairman; Harold Pehlke, Forward, secretary and Emil Hirsch, Swiss, treasurer. Upon the recommendation of Andy Doyle, the committee adopted the formal name of 'Joint Committee for Turner Consolidation.' The members of the committee were:

The committee agreed that the present lot owned by the Forward Turners was not large enough to construct a big enough Turner Hall to accommodate all three societies but that the location was desirable. A vote of confidence was given to the Forward Turners to acquire an additional vacant lot on the S.E. corner of Belmont and Natoma Avenues, measuring 250' x 125'. Edward Arkema, Atty. was able to locate the owner of this land parcel and the Forward Turners purchased this property for $21,909.46, including back taxes and legal fees, in March, 1955.

By July, 1955, approvals had been obtained from each of the three societies as to a new society name, merger plan, adoption of a building fund lottery and each society named five members to serve on the initial Board of Directors of the new society for a period of two years. The directors named by Forward and Swiss were the same Turners then serving on the 'Consolidation Committee.' Social replaced Ray Achtner and John Haderlein with LeRoy Peterson and Vic Lube. Erwin Schmidt was elected by the committee to serve as secretary to replace Harold Pehlke who resigned from that office. William Meyer and Emil Hirsch, retained their respective offices.

Between July and October, 1955, the committee finalized a new constitution and by-laws which were approved by each society, interviewed five architects and selected Childs and Smith to draw preliminary plans, investigated several fund raising programs under the leadership of Andy Doyle, a publicity and fund raising brochure was begun by Harvey Sanders and Glen Mittlacher, the possibility of purchasing the Lions Club Building on North Avenue was investigated. Edward Arkema arranged to have the lots at Belmont and Natoma rezoned, specifics for needs of the new building were determined with a top price of $350,000 established, preliminary cost figures for bowling alleys were developed and a first attempt was made to develop an operating budget.

During the balance of 1955 and January, 1956, work concentrated on plans for a joint meeting of the three societies to vote on the merger, building plans, finance plans and to form the new society. This meeting, resulting in the formation of the American Turners-Northwest Chicago, was held on February 12, 1956 at the Social Turner Hall. The general chairman of the meeting was William Meyer; secretary of the meeting was Erwin Schmidt. Vic Lube reported on building plans and estimated costs; Richard Trankle reported on finance matters of the new society, a new corporation to operate the building and fund raising; Harvey Sanders reported on the fund raising brochure and advertising plans. Erwin Schmidt recapped the activities of the 'Joint Committee for Turner Consolidation' since its formation exactly one year prior. The full committee met 22 times during this period, plus 19 sub-committee meetings. In addition, each committee member, plus alternates and other Turners, had assignments to complete between meetings. Edward Arkema reported on legal requirements for the merger and each society then met separately to approve and sign the required resolutions and forms. The plan was for the Forward Turners to change its name to 'American Turners-Northwest Chicago' and the Social and Swiss Turners to then merge with this new society (the old Forward Turners). Everything was approved as submitted and the new society was formed.

The first meeting of the Board of Directors of the new society (formerly the 15 man Consolidation Committee) was held on February 17, 1956 with William Meyer elected Chairman and Erwin Schmidt Secretary, pro-tem. Final plans and drawings for the brochure were submitted by Harvey Sanders; the society colors of red, white and blue were recommended by Dave Zweifel and approved. Al Graf was designated as fund raising chairman and Fred Zitta was named as the society gym instructor. A six man nominating committee was appointed to prepare a slate of officers for an election to be held at the 1st general meeting of the society. This meeting was held on March 11, 1956 with Arthur Marthaler being elected as the new president.

Reprinted from the
HISTORY OF THE TURNVEREIN VORWAERTS
cataloged at the Chicago Historical Society in the year 1991.

While our building sale on Belmont Avenue was being finalized in 2005, we started looking into renting another facility so that we could continue with our gym program and our other activities with as little interruption as possible.

We located a property at 3825 N. Willow Road in Schiller Park, Illinois. The owner of the facility remodeled the inside to our needs. We installed a State of the Art gym floor and purchased new furniture. While we were waiting for this completion, we continued on with our meetings in various member's homes and the Auxiliary had their meetings in a retirement facility and our regular Society meetings were conducted at Shabbona Park. The Millionaires and Baers continued to meet in George Boysen's home and at Turner Camp for the summer months. The Men’s and Women’s Bowing leagues moved to Irving Park Bowl.

We received possession at 3825 N. Willow Road in March of 2006. After having moved all of our equipment into storage after the sale, it was a tremendous job moving everything into our new place and getting ready for our Grand Opening on March 12, 2006. We had many volunteers to accomplish this and thanks to all of them. There were around 300 people in attendance on that Sunday afternoon.

Since closing our gym on Belmont Avenue in July 2005, many of the gymnasts continued training in a rented gym in Schaumburg under the direction of our Coach, Yefim Kharpak. Our gym classes started right up in our new facility, with Yefim Kharpak as our coach and everyone is pleased with our own gym again and very happy to bring home 1st place trophies. We have matched our enrollment with what we had on Belmont Avenue and our Coach hopes to double this for the next year. We have established higher (skill) standards at our gym and so the gymnasts set higher goals for themselves individually and as a team.

We have a fully equipped gymnastic/volleyball facility in our new location at 3825 N. Willow road in Schiller Park, Illinois. We also have Club Room facilities for our Membership. The Auxiliary, Millionaires, Baers and Pioneers have resumed their gathering times.